Pictures from the Reading: 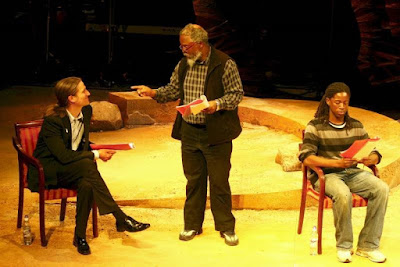 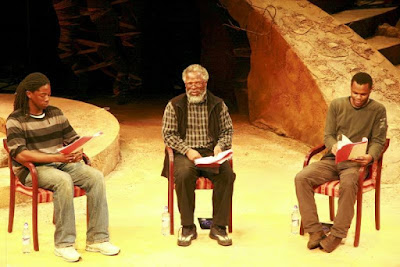 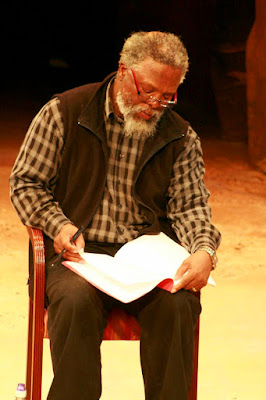 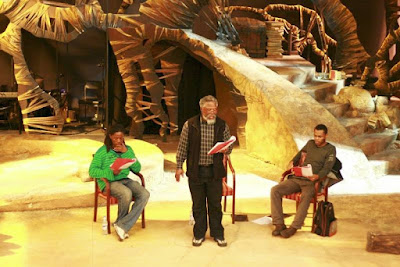 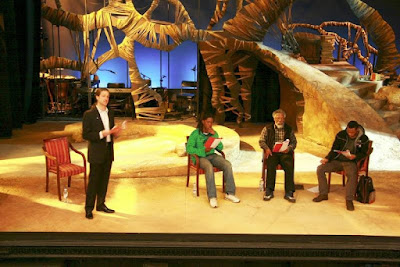 St Mary’s University College in association with the Richmond Theatre & the Royal Shakespeare Company staged the premiere reading of the Robben Island Bible Project at Richmond Theatre on March 24.

The reading included a performance by Tony Award winning actor John Kani who read excerpts from recently conducted interviews and selected Shakespearian texts of political prisoners on Robben Island. John Kani was joined by Atandwa Kani & Omphile Moulusi, two of the young actors from RSC & Baxter Theatre Company’s The Tempest.
The Drama department at St Mary’s University College closed for the afternoon and the stalls at the theatre were filled with students and other special guests from Richmond, the University College and from the anti-apartheid movement.
The playwright Matthew Hahn, who is a lecturer at St Mary’s University College, said, ‘The show went well and the actors quickly relaxed into the script even with only had two hours rehearsal on Monday afternoon. The audience greatly enjoyed the improvisations & interjections by the actors which showcased an African form of theatrical interaction not often seen in south west London.

‘Afterwards John Kani participated in a moving, politicised and exciting question and answer session which can have left no-one in the audience in any doubt of the power that theatre has to communicate, keep ideals alive, provide metaphors for resistance and inspire great acts of courage and humanity.’

John Kani said, ‘The role of theatre, even today, is part of, trying to bond a nation, talk about tolerance, reconciliation, rebuilding our own lives and our own country, and our society. We see a lesson which our people could learn in this great writer called Shakespeare.

‘There is an African tradition of storytelling, which is actually a method of retaining the unwritten history that the white racist minority government did not want to write down. So our grandparents and great-grandparents handed down our history orally, and people were developed into seasoned and well-respected storytellers. And that also, the stories were part of reflecting the society itself. So theatre, coming into our continent, mixed the two genres; the genre of storytelling, and the western concept of what theatre is.’

The Robben Island Bible Project has gained the support of many prominent South Africans and international organisations including the British High Commissioner to South Africa, Paul Boateng; South African High Commissioner to the United Kingdom, Ms Lindiwe Mabuza; Tony Award winning actor Dr. John Kani; the British Council in South Africa and St Mary’s University College, Twickenham, amongst others.
The play is based on South African Sonny Venkatratham’s copy of ‘Complete Works of William Shakespeare’. A political prisoner on Robben Island during the 1970s, Venkatratham smuggled his copy of the ‘Complete Works’ into the prison by persuading his warders that it was a religious Hindu text. He then surreptitiously passed the book to a number of his fellow political prisoners in the single cells. Each of them marked his favourite passage in the ‘Complete Works’ and signed it with the date. It contains thirty-two signatures, including those of Walter Sisulu, Neville Alexander, Billy Nair, Nelson Mandela, Govan Mbeki, Ahmed Kathrada, Andrew Masondo, and Mac Maharaj, all luminaries in the struggle for a democratic South Africa.
These men signed passages within the text which they found particularly moving / meaningful / profound. The selection of texts provides fascinating insight into the minds, thinking and soul of prisoners at that time.
Ahmed Kathrada, Michael Dingake, Saths Cooper, Theo Cholo, Kwede Mkalipi, Sonny Venkatrathnam & Andrew Mlangeni, all former political prisoners on Robben Island & signatories were interviewed as part of the first phase of this project in October & November 2008.
The second phase of the project will begin in the summer of 2009 when Matthew Hahn works with actors from the Market Theatre in Johannesburg, South Africa to rehearse the play.
Posted by Matthew Hahn at 12:06