The Bodleian Library at the University of Oxford agrees to house archives.

The Bodleian Library at the University of Oxford has agreed to house archives of the play, The Robben Island Bible.  This includes the research [ audio & video recordings of the interviews in 2008 & 2010 amongst other documents], the playscript, videos of several of the readings that have taken place since 2008 and this blog.  The archive will be continuously updated to include the latest developments in the project.
Posted by Matthew Hahn at 17:31 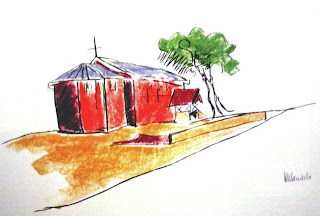 A book titled “Collected Works of William Shakespeare” and nicknamed the “Robben Island Bible” was crucial in lifting the spirits of key anti-apartheid political prisoners in South Africa’s brutal Robben Island Prison during the 1970s. Among them was Nelson Mandela, who spent more than 18 of his 27 years in the prison before becoming South Africa’s first black president in 1994.

“I wanted to exhibit the ‘Robben Island Bible’ at the Folger Shakespeare Library after I saw it,” said David Schalkwyk, 59, director of research at the library on Capitol Hill. Schalkwyk, who is also a professor of English at the University of Cape Town, South Africa, explained, “I got the idea to exhibit the book here when it was in London at the British Museum in 2012 during the Olympics.”

The Folger Library exhibit, titled “A Book Behind Bars: The Robben Island Shakespeare,” opened May 25, 2013. The exhibit also includes sketches of Robben Island locations by Mandela, which are being shown for the first time in the U.S. Mandela drew them while visiting the now defunct prison in the early 2000s to reflect on his time there.

The artwork by Mandela is on loan from a private collection belonging to Bonnie Cohen, the wife of a member of the Library’s Board of Governors, Louis R. Cohen. Both made the sketches available for the exhibit. “I hope people will see the exhibit and learn something about how Shakespeare has been influential in unusual circumstances,” Schalkwyk said. “I hope people also learn about the Robben Island Prison, and the struggle for freedom and dignity.”

Schalkwyk said the book is an example of how important the humanities are, particularly under conditions without material comforts “It reminds us that the humanities must be made available to ‘ordinary’ people, not just to scholars.”

Coincidentally, Matthew Hahn, 40, a lecturer at St. Mary’s University College in London, and a theater director and playwright, had written a play about the “Robben Island Bible.” Schalkwyk and Hahn met at the British Museum exhibit of the book. Schalkwyk invited Hahn to stage a one night only dramatic reading of his play on June 3, 2013 at the Folger Shakespeare Theater in support of the library’s exhibit. “More than 300 people attended the play,” said Schalkwyk.
Hahn based his play on interviews he conducted with eight of the 32 former prisoners who selected their favorite passages in the book, wrote their names in the margins next to the passages, and penned the dates when they read them. Only 14 of the 32 are still living. The writings they chose and signed their names next to “provides fascinating insight into the minds, thinking and soul of those political prisoners who fought for the transformation of South Africa,” Hahn wrote.

The book’s nickname stemmed from a deception used to get it past prison authorities. Robben Island wardens only allowed prisoners to have one book, other than a religious text. Political prisoner Sonny Venkatrathnam asked his wife to send him the Shakespeare anthology. She placed a dust jacket on the book featuring graphics of Hindu deities on the front and back, which tricked the wardens into believing the book was a Hindu “bible.” Prison authorities would have otherwise barred the book, as they considered Shakespeare “subversive.” Venkatrathnam kept the book as a “souvenir” of his time in prison with Mandela and other anti-apartheid icons.

The audience for the play and the exhibit found both enlightening and meaningful. “I think they show how an oppressed people can take an extremely negative situation and turn it into a positive,” said George Powell, 70, a retired high school sports coach, teacher and counselor from Northeast.

“The ‘Robben Island Bible’ provided both spiritual and mental sustenance (to the prisoners),” said Mary Fraker, a writer who lives on Capitol Hill. “Some even used it to teach their illiterate brethren to read. I believe it’s not an exaggeration to say that the book saved lives.”

“Seeing President Mandela’s signature next to the passage from ‘Julius Caesar’ was an incredible experience,” said Mary McCue, a freelance writer who also lives on Capitol Hill. “I found Mandela’s sketches poignant, given that he is now hospitalized with a lung infection stemming from the tuberculosis he contracted when he was imprisoned in Robben Island. Everyone should see this exhibit. It’s small, but very powerful.”

“A Book Behind Bars: The Robben Island Shakespeare” will be exhibited at the Folger Shakespeare Library through September 29. The exhibit is free and open to the public. For further information, call 202-544-4600.