Candice Vetter of CHV TV has compiled a video of the surprise reading of the Robben Island Bible, performed by South African born actor Jack Klaff and British actor, Jeffrey Kissoon, the reading was performed at South Africa House for the first time in celebration of the 20th anniversary of democracy and it was a profound moment for all in attendance to witness it in the building that was once seen as a bastion of the apartheid régime that is now a symbol of freedom and hope. The Robben Island Bible is a play based on selected text from South African Sonny Venkatrathnam's copy of ‘The Complete Works of William Shakespeare’ & interviews with former political prisoners held on this island prison.
Posted by Matthew Hahn at 13:19

The Robben Island Bible with the Deputy President

A reception with the Deputy President of South Africa Kgalema Motlanthe for Global South Africans in the UK was hosted at South Africa House in London, on Friday night (25 April) with the High Commissioner to the UK Obed Mlaba in attendance.
The evening began with an opportunity to network and was followed by a surprise reading of the Robben Island Bible, performed by South African born actor Jack Klaff and British actor, Jeffrey Kissoon, the reading was performed at South Africa House for the first time, and it was a profound moment for all in attendance to witness it in the building that was once seen as a bastion of the apartheid régime that is now a symbol of freedom and hope.
After the performance guests where afforded the opportunity to engage with the Deputy President, and some took the chance to reflect on 20 years of freedom and thank those that fought for libertion of our country, who have given us the opportunities we have today as South Africans living abroad.
After the formalities had ended many took the opportunity to take photographs and engage with the Deputy President. 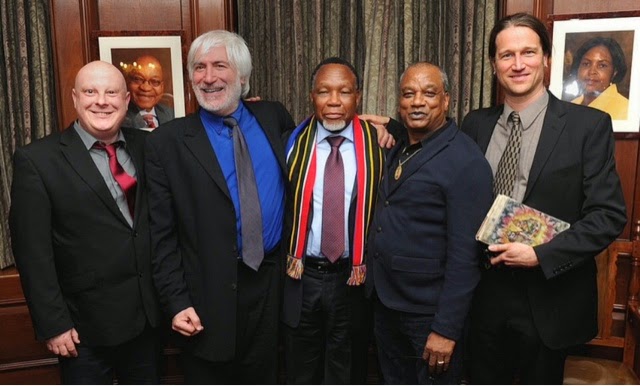 More than 50 delegates to the 20 years of Democracy conference at Oxford University attended the special reading of the Robben Island Bible by Matthew Hahn in the Nissan Lecture Theatre of Thursday night.
The reading was held on the eve of a major–two-day conference organised by Professor William Beinart and his team from the African Studies Centre at Oxford. The conference attracted over 300 academic papers and covers a wide range of topics related to South Africa’s first 20 years as a democracy.
The keynote address was delivered by Deputy President Kgalema Motlanthe and speakers included the most renowned domestic and international academic experts on South Africa and the launch of Hugh Macmillan’s eagerly-awaited The Lusaka Years (Jacana) and Busani Ngcaweni’s Liberation Diaries: Reflections on 20 Years of Democracy.
South African actor Jack Klaff and British actor Jeffery Kissoon brought back the rich dialogue between the country’s liberation leaders incarcerated in the single-cell high security section of the island prison.
The list of prisoners in the single cell section – there were 30 at any given time – reads like a who’s who of the liberation movements including the top leadership of the African National Congress (ANC) – Nelson Mandela. Walter Sisulu, Ahmed Kathrada and Govan Mbeki; the Black Consciousness Movement’s Saths Cooper and Strini Moodley; the Liberal Party’s Eddie Daniels and leaders of the Pan Africanist Congress (PAC) and the Unity Movement including Neville Alexander and Sonny Venkatrathnam’s.
Venkatrathnam’s late wife, Theresa, smuggled the Collected Works of Shakespeare onto the island for the literature-starved prisoners and disguised the book with stickers from the Hindu Festival, Dewali, presenting it first as the Hindu scriptures and then as “the bible by William Shakespeare.”
Thirty-two prisoners marked and signed texts which provided a means of discussing political and moral issues.
Mandela studied Shakespeare’s plays at the Methodist mission school he attended in the Eastern Cape and he – and other prominent leaders of the ANC such as Thabo Mbeki and Chris Hani – quoted frequently from Shakespeare in their speeches after they returned from exile in 1990 ahead of the first democracy elections in 1994.
Anthony Sampson, Mandela’s official biographer, noted that for the second half of the last century, Shakespeare’s plays were one of the main influences on the liberation movement and its leaders.
“Shakespeare became more politically relevant than the Bible or Marx,” the late Sampson wrote in the Observer in 2001.
“Successive generations of African leaders saw his plays as an inspiration for their struggle and for humanity.”
Mandela’s selection from the Robben Island bible was a soliloquy from Julius Caesar, a play which had a particular resonance for Mandela and other ANC leaders because it raised the question as to whether it was justified to conspire against despotic leaders such as Julius Caesar.
Mandela chose the passage:
Cowards die many times before their deaths;
The valiant never taste of death but once.
Of all the wonders that I yet have heard
It seems to me most strange that men should fear;
Seeing that death, a necessary end,
Will come when it will come.
Mandela’s entry, signed in his own neat hand, was dated: 16th December, 1977.
Matthew Hahn, a story-teller and editor and lecturer at St Mary’s University in London, was inspired by the story and travelled to South Africa to interview eight of the surviving Robben Island prisoners.
He wrote a script based on the interviews and the Shakespeare quotes chosen by the prisoners.
Extracts from the script have been performed at the Richmond Theatre (2009), the Southbank Centre (2012), the British Museum (2012) and the Folger Shakespeare Library in Washington (2013). 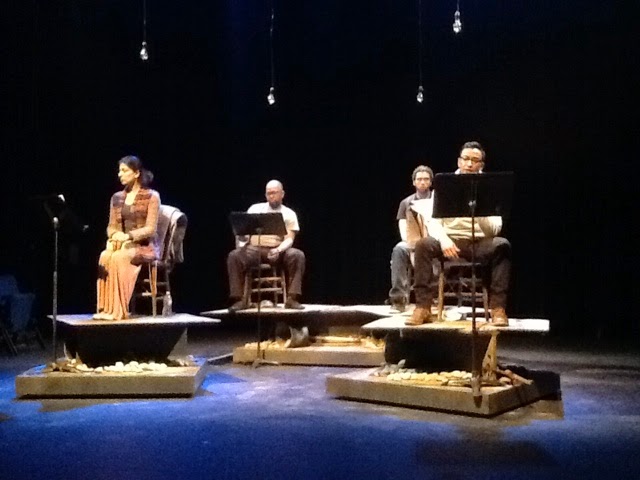 Montana State University will present the Robben Island Bible in celebration of the 450th Birthday of Shakespeare and the 20th Anniversary of the election of Nelson Mandela as President of South Africa.

The MSU Honors College, in collaboration with the College of Arts and Architecture and Montana Shakespeare in the Parks, will present four performances of The Robben Island Bible, by Matthew Hahn, April 15-17, 2014.

This play is based on selected texts from South African Sonny Venkatrathnam's copy of “The Complete Works of William Shakespeare” as well as on interviews with former political prisoners held on this island prison. In the 1970’s, prisoner Sonny Venkatrathnam received ‘The Complete Works of Shakespeare” onRobben Island during a time when they were briefly allowed to have one book with them. The book’s fame resides in the fact that Venkatrathnam passed it to a number of his fellow political prisoners including Walter Sisulu, Nelson Mandela and Govan Mbeki.  Thirty-three men marked their favorite passages in the book; passages they found moving, meaningful and profound. The production provides insight into the minds, thinking and soul of the men who fought for the transformation of South Africa. It also speaks to the power of Shakespeare’s words, regardless of place or time.

A cast of four has been selected from top tier American regional theaters and will be directed by Montana Shakespeare in the Parks Artistic Director Kevin Asselin with playwright Matthew Hahn. The evening will offer a unique and compelling look at the interconnectedness of our past and present, and the lasting power of art to inspire change.

The playwright, Matthew Hahn, will also present a public lecture on the research and development of the play, on April 16, 2014 from 3-5pm in Leon Johnson Hall 339.
Posted by Matthew Hahn at 21:44